What is Patent Scope and Why Should You Care? Because Hogs Get Slaughtered—That’s Why.

By: Paul Norton
Print
Email
Share
Save as PDF

You came up with what is in your estimation the next best invention. For the purposes of illustration, let’s say your invention is a car that boasts a 0–60 mph time of less than 4.0 seconds. The key to your invention is a V-8 engine combined with a smattering of technical features. You visit with your patent attorney, she drafts and files a patent application, and you are eventually awarded a patent. You got what you wanted, right? A patent is a patent.

Not necessarily. As you may know, a patent is a right to exclude others from making, using, selling, offering to sell, or importing your patented invention for a limited period of time (right now 20 years from the day you file your patent application). In exchange for the right to exclude others, your patent must include a detailed disclosure of how to make, use, or perform the invention. As to what your “invention” is exactly, that is defined by the patent claims. The claims define the “scope” of the invention—essentially the boundary of the patent owner’s right to exclude anything or anyone falling within the scope of the claims.

Take your patented sports car from earlier, for example. What if your patent claims a car with a Lincoln Y-Block V-8 engine having a 12.0:1 compression ratio that is additionally combined with a smattering of technical features, each of which is explicitly recited in painful detail. This patent has a narrow scope, and while it is less likely to protect a significant chunk of market share, it can help you protect against knock-offs, even if competitors will likely have an easier time designing around such a narrow patent.

On the other hand, what if your patent claims “a car operable to go from 0 mph to 60 mph in less than 4.0 seconds”? That claim has a pretty broad scope, and if enforceable, it would be a very powerful patent. With a patent like that in hand, you could dominate the sports car industry for up to 20 years. While we would all love to have a patent of such broad scope, there is a potential weakness with broad claims that merits additional thought. In short, patents sporting broad claims can be vulnerable to an invalidity challenge based on a “lack of enablement” and/or a “lack of written description.”

A lack of written description is a little more difficult to nail down. At its core, when a patent is said to suffer from a lack of written description, it means the scope of the claims is not supported by the patent specification. More pointedly, it is unclear from the patent specification that the inventor was in possession of the whole scope of the claimed invention at the time of filing. In many cases, patents disclose examples of the claimed invention. However, meeting the written description requirement is not simply a matter of providing a large quantity of examples, but rather, it is about providing the proper quality of examples.

A recent court case illustrates this point. A company named AbbVie had a couple of patents on an antibody that binds to human interleukin 12 (IL-12).[1] The scope of their patents was very similar to the broad sports car example made earlier. They claimed “[a] neutralizing isolated human antibody, or antigen-binding protein thereof that binds to human IL-12 and disassociates from human IL-12 with a koff rate constant of 1 x 10-2 s-1 or less, as determined by surface plasmon resonance.”[2] In essence, AbbVie claimed what the antibody is functionally capable of doing instead of defining the invention based on its structure. In an attempt to back up the broad scope of the claim with appropriate written description, AbbVie provided over 300 examples of antibodies within the patent specification that fit the bill.[3] The problem was that all of the examples were similar to each other in many respects.[4] They didn’t cover the broad scope defined by the claims.[5] 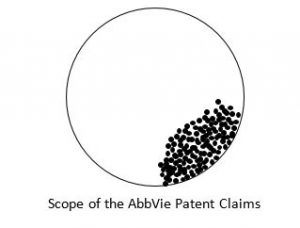 You have to perform a balancing act to ensure claims are of an appropriate scope—not too narrow and not too broad. In most every case, it is of the utmost importance to first define the scope of the invention (in light of the inventor’s disclosure and the client’s business/commercial goals) and then draft claims in accordance with the defined scope. When possible, it is often beneficial to develop a claim strategy that is aimed at a variety of different claim scopes—some independent claims being narrower or broader than others. Also, be sure that your examples are qualitatively spread out to cover the whole scope of the claims and are not all huddled in a corner of the claim scope, regardless of their number. Above all, it is important to be reasonable. As my Pappy used to say, “pigs get fat, son; hogs get slaughtered.”