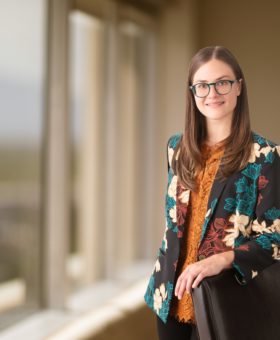 Since publication of the Bitcoin blockchain in 2009, blockchains and cryptocurrencies have garnered much public attention. A blockchain contains a secure and tamper-resistant ledger of transactions. Additional blockchain characteristics include the lack of a central server, users are not required to use an intermediary to perform and/or record transactions on the blockchain, and blockchain users retain a certain level of anonymity from the general public. These features make blockchains a compelling choice in instances requiring heightened security and immutability. Many important and interesting questions spanning a myriad of legal disciplines and beyond will inevitably be raised as blockchain use expands into the mainstream.

Blockchains were designed to be decentralized, meaning the blockchain is not stored on a central server. Instead, blockchains rely on peer-to-peer networks and cryptographic means (e.g., public/private key pairs) to establish trust and legitimacy. Information is periodically verified on a blockchain using a consensus mechanism. One type of consensus mechanism, the proof-of-work mechanism, requires users to compete against one another to solve a puzzle or math equation. The first user to complete the task receives a reward. A common use of the consensus mechanism is the Bitcoin blockchain where users, or “miners,” receive a portion of a Bitcoin by being the first to complete the verification task. In addition to rewarding users, consensus mechanisms are public and transparent means by which the data stored on the blockchain is verified. Once verified, the “block” of data is added to the blockchain. As the data is stored across the user network, and not a central server, it is virtually impossible to alter. This gives blockchains their resilient, tamper-resistant, and immutable characteristics. Users can trust the data stored on the blockchain is accurate and has not been tampered with.

The tamper-resistant and pseudonymous nature of a blockchains makes them digital vaults for storing sensitive information. While blockchains commonly record financial transactions, additional applications include storing health records, land ownership records, and contracts. Protection is also granted to the privacy of blockchain users as they are identified by a public key (i.e., username) rather than any type of personal information. While an individual is tied to their public key, the individual’s identity is not readily available.

A use of blockchains currently gaining popularity is the management of NFTs, or non-fungible tokens. An NFT allows a creator to digitize almost any asset and record the NFT’s ownership history on a blockchain. NFT examples include clips of famous sporting events, song tracks, and various fashion items to be worn by metaverse avatars. NFTs confer varying levels of ownership rights to the NFT purchaser. NFTs can be coded to grant complete ownership of an asset or the mere right to use the asset without anything more. The level of ownership is determined by the NFT’s creator and embedded in the NFT’s code. Works of art are popular implementations of NFTs. However, many purchasers of art NFTs did not buy the copyrights to the work of art. Rather, they purchased the right to own a digital version of that work of art and to have that ownership securely recorded to a blockchain. The NFT creator retains all additional rights to the artwork.

As blockchains are an emerging technology, the law surrounding blockchains is still in its infancy. Uncertainty exists as to how to apply existing legal frameworks, such as copyright and contract law, to this digital landscape. While some government agencies, such as the IRS and the SEC, have dipped their toes into these regulatory waters, these agencies are currently capable of regulating only a small part of blockchain activity. As more of the global population starts using and interacting with blockchains, this regulatory framework will need to increase in speed and scope of application. The decentralized, disintermediated, pseudonymous characteristics of blockchains pose interesting questions in enforcing legal rights, including how to identify infringers operating on a blockchain and how to regulate blockchains that operate across state and international borders.