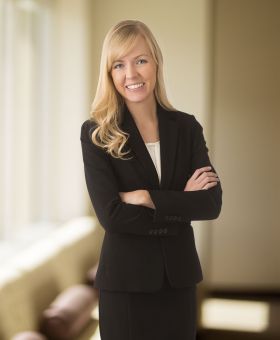 On March 7, 2017, “Fearless Girl” was installed opposite “Charging Bull” in New York City’s financial district.[1] Fearless Girl’s message of female empowerment was soon overshadowed by a controversy over whether the four-foot tall sculpture infringed the intellectual property rights in Charging Bull.[2] This post will provide a brief overview of the legal issues in that dispute.

Arturo Di Modica created Charging Bull in response to the stock market crash in the late 1980’s.[3] In December 1989, Di Modica left the bull in front of the New York stock exchange, a 7,000 pound piece of guerrilla art meant to remind New York and the rest of the United States of the “strength and power of the American people.”[4] The city impounded the sculpture, but after public outcry, re-installed the sculpture at Bowling Green, where it remains today.[5]

Enter Fearless Girl. Fearless Girl was commissioned by the investment firm State Street Global Advisors as an advertisement for an index fund that promotes gender diversity among senior leadership in companies.[6] A plaque installed at Fearless Girl’s feet read, “Know the power of women in leadership. SHE makes a difference”—with “SHE” being the index fund’s NASDAQ ticker symbol.[7]

Di Modica sent NYC Mayor Bill de Blasio a cease and desist letter objecting to Fearless Girl as transforming Charging Bull’s “positive, optimistic message” into a “negative force and a threat.”[8] Di Modica demanded the removal of Fearless Girl on the grounds that the sculpture constitutes trademark dilution and copyright infringement, and violates Di Modica’s moral rights under the Visual Artists Rights Act (“VARA”).[9] While there are arguments in favor of each of these claims, Di Modica’s claims are probably not strong enough to merit legal remedies. 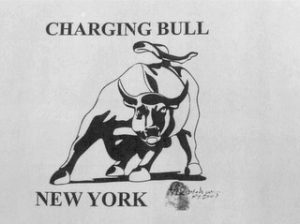 It is registered for use with “clothing, namely T-shirts and ties.” Di Modica’s claim would be governed by 16 U.S.C. § 1125(c), which creates a cause of action for use of a mark that “is likely to cause dilution by blurring or dilution by tarnishment of the famous mark.” The statute further defines a “famous mark” as a mark that is “widely recognized by the general consuming public of the United States as a designation of source of the goods or services of the mark’s owner.”[10]

To prevail in a trademark dilution claim, Di Modica would have to show that his mark is sufficiently famous under the statute. This is a high bar that would likely be very difficult for Di Modica to meet. He would then have to show that the placement of Fearless Girl opposite his Charging Bull sculpture dilutes his registered trademark, which may be a stretch considering the attenuated connection between Fearless Girl and the registered mark.[11] Thus, it is not likely that Di Modica would prevail in a trademark dilution claim.

Di Modica must clear a couple of statutory hurdles before he can make a claim under VARA. Charging Bull was completed in 1989, before VARA was enacted; thus, VARA only applies to Charging Bull if Di Modica has always held title to the bull.[14] Di Modica dropped the sculpture off in New York City nearly thirty years ago and has not had possession or control of it since then, so there is an argument that he abandoned Charging Bull and has no claim under VARA.

In addition, VARA stipulates that “[t]he modification of a work of visual art which is the result of…the public presentation, including lighting and placement, of the work is not a destruction, distortion, mutilation, or other modification.”[15] Fearless Girl has not physically modified Charging Bull; rather, Fearless Girl has changed the perception of Charging Bull due to its placement opposite Charging Bull. Therefore, it is not likely that Di Modica has a claim under VARA.

In conclusion, regardless of the artistic or philosophical merits of Di Modica’s claims, he probably has no strong legal basis to remove Fearless Girl. If he is determined to remedy the situation, Di Modica should consider moving Charging Bull—or, like the artist who created “Pissing Pug,”[16] continue the conversation with another sculpture of his own.

[7] Id. The plaque has since been removed. CITE Jen Wieczner, Why the Fearless Girl Statue’s Controversial “SHE” Plaque Was Removed, Fortune (Apr. 17, 2017) http://fortune.com/2017/04/17/fearless-girl-statue-nyc-plaque-she-nasdaq/.

[11] Di Modica could also claim that Fearless Girl dilutes his common law trade dress in Charging Bull itself; however, in order to claim trademark rights in the bull, he would first have to show that he is using the bull in commerce.

[14] “With respect to works of visual art created before the effective date set forth in section 610(a) of the Visual Artists Rights Act of 1990, but title to which has not, as of such effective date, been transferred from the author, the rights conferred by subsection (a) shall be coextensive with, and shall expire at the same time as, the rights conferred by section 106.” 17 U.S.C. § 106A(d)(2).

[16] Peter Holley, An Artist Hated the “Fearless Girl” Statue – So He Put This At Her Feet, The Washington Post (May 30, 2017) https://www.washingtonpost.com/news/post-nation/wp/2017/05/30/pissing-pug-pops-up-beside-fearless-girl-as-battle-of-wall-street-statues-continues/?utm_term=.93b283c5eb9a.